Newborn Jaundice and the Brain; the Connection is Called “Kernicterus”

Jaundice is very common in new born babies. In fact, approximately 60 percent of all newborns will have slight to mild jaundice. Jaundice, the term used to describe yellowing of the skin and eyes, occurs when bilirubin exceeds a certain level in the blood which, in turn, can cause some babies to appear yellowish. Bilirubin is a yellow pigment produced in the normal breakdown of red blood cells. The liver’s job is to process the bilirubin and eliminate it. Many newborns have jaundice because their red blood cells are broken down more frequently and their livers are not mature enough to properly eliminate the bilirubin from the bloodstream. In many cases, jaundice resolves on its own as the newborn’s liver begins to mature and properly process the bilirubin. However, in some cases, jaundice does not resolve on its own. The bilirubin continues to rise eventually overwhelming the liver’s ability to process it and, when that occurs, a potentially dangerous and catastrophic road lies ahead.

Knowing the catastrophic risks associated with severe, untreated jaundice, what are the proper rules that hospitals and doctors should follow to diagnosis the cause of jaundice and treat it at the appropriate time? Thankfully, leading medical organizations like the American Academy of Pediatrics (AAP) have studied this issue for years and published Clinical Practice Guidelines that have been adopted throughout the country and the world. The AAP Clinical Practice Guidelines provide the guidance and tools necessary for healthcare providers and hospitals to prevent, diagnose the cause of, and ultimately treat severe hyperbilirubinemia and increasing jaundice so that there is no catastrophic result to the baby. 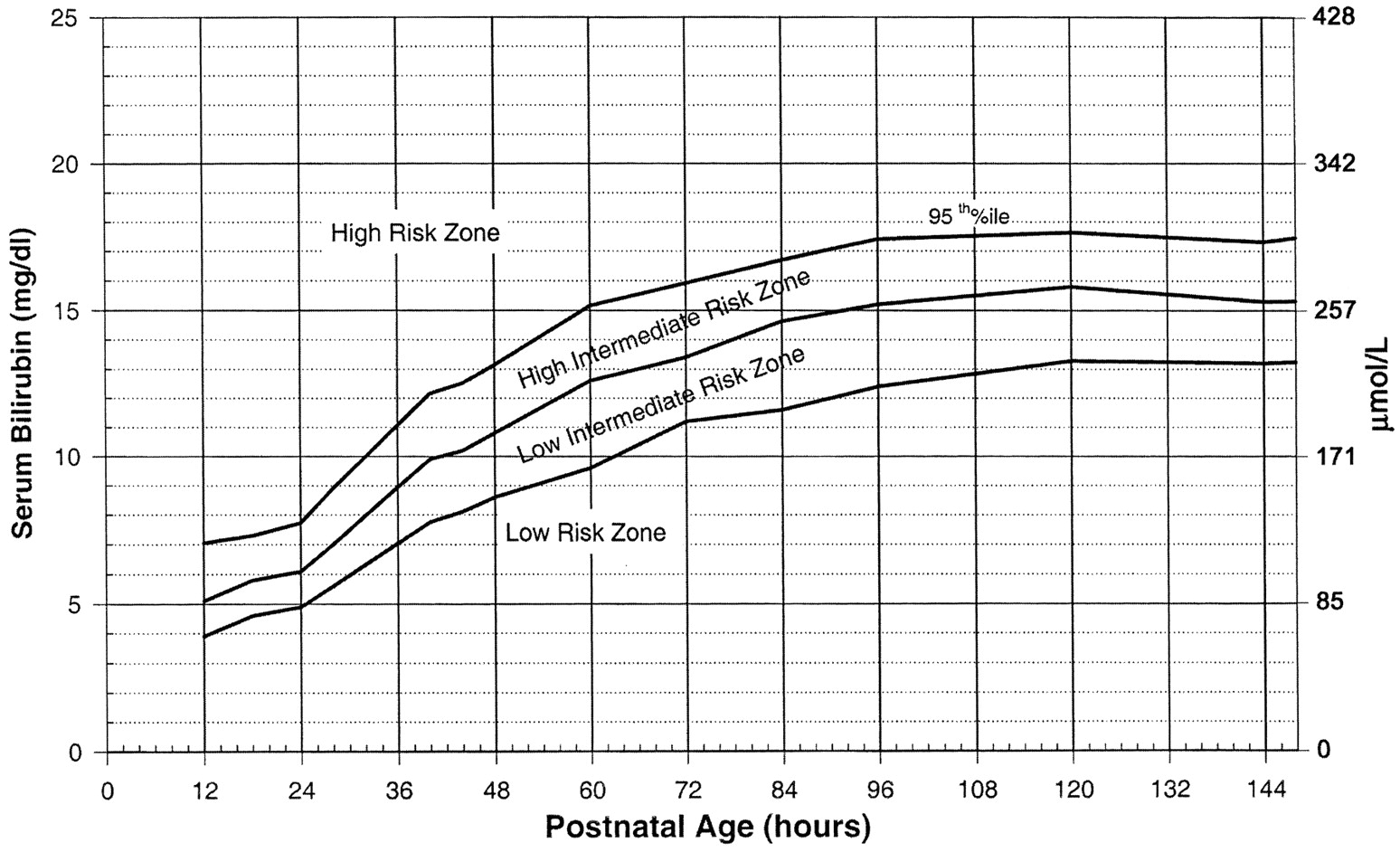 Beyond the Bhutani Nomogram, there are very well known and major risk factors for the development of severe hyperbilirubinemia and Kernicterus promulgated by the AAP which include prematurity; jaundice in the first 24 hours of life; babies whose siblings had jaundice and needed treatment; babies whose blood group is incompatible with their mother’s; and babies who are exclusively breastfed. While these are some of the most important tools from the AAP Clinical Practice Guideline, there are more tools and guidance provided by the AAP Clinical Practice Guideline to help hospitals, doctors, and other healthcare providers prevent, diagnose and treat rising bilirubin levels and jaundice.

In addition, Hospitals should have policies and procedures in place outlining the protocols for the prevention, diagnosis and treatment of rising bilirubin levels in newborn babies. As an example, Hospitals should have policies and procedures that require monitoring the TSB bilirubin levels while the baby remains hospitalized after birth. These follow-up tests track whether the newborn’s bilirubin level is decreasing, as it should, or increasing. Those bilirubin test results can then be plotted on the Bhutani Nomogram as described above to determine whether your baby has a higher than normal chance of being at risk of severe hyperbilirubinemia and Kernicterus. Other nomograms can similarly be used by plotting TSB levels to determine when and if a baby requires certain treatment for rising bilirubin levels like photography lights or even an exchange transfusion. 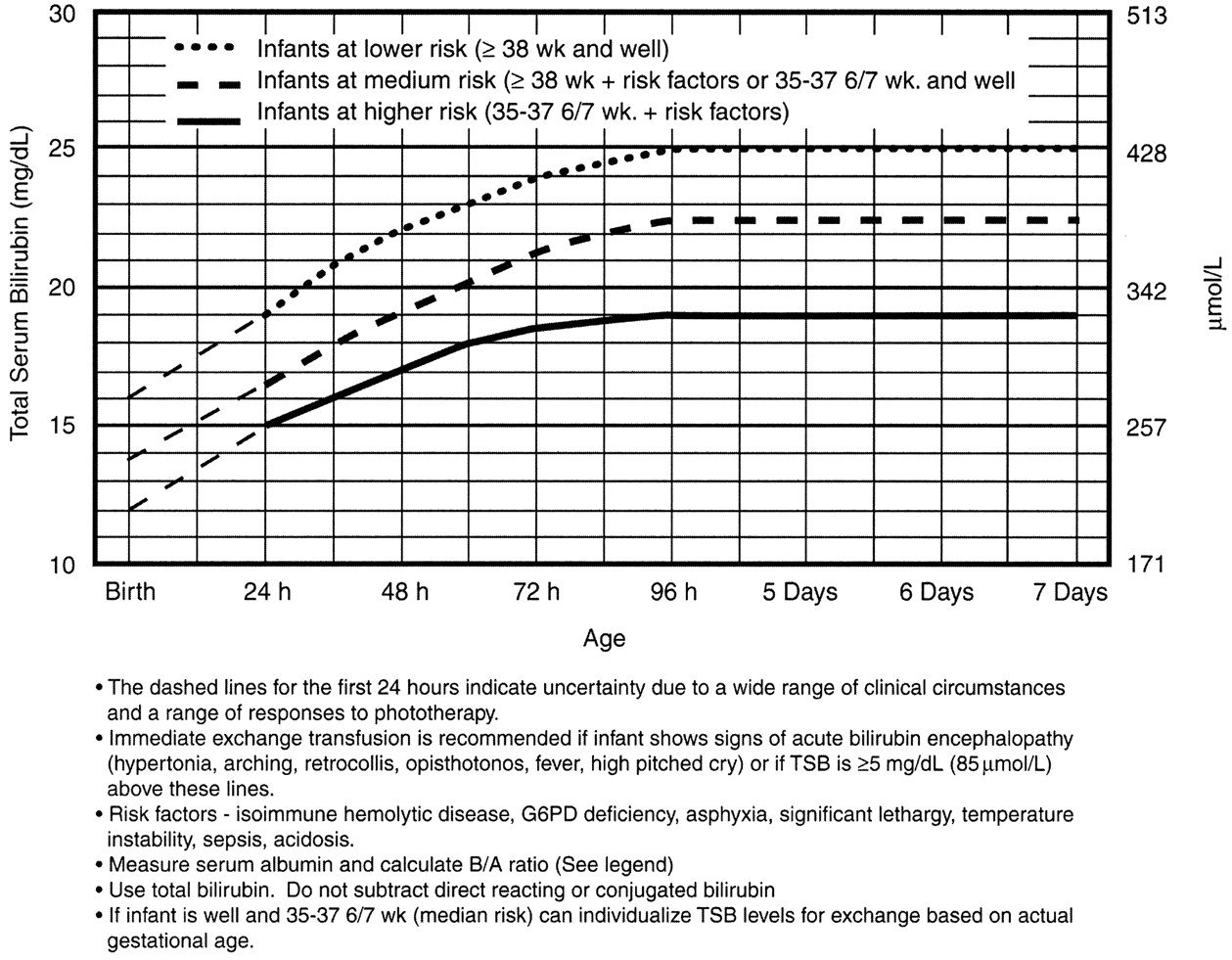 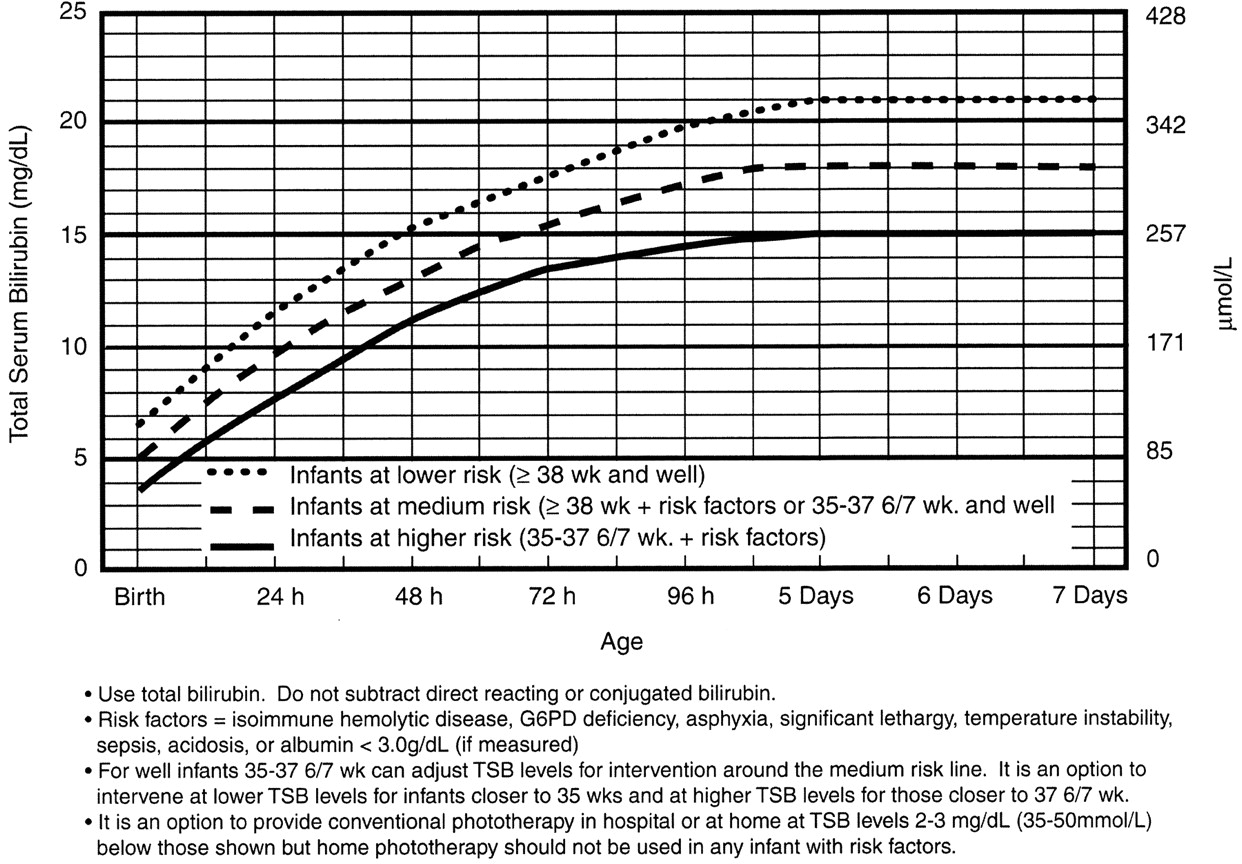 Hospitals should also have policies and procedures in place to require a bilirubin blood test before your baby is discharged, so that any increase in the bilirubin level can be caught before the baby leaves the hospital.

The treatment for excessive bilirubin (hyperbilirubinemia), no matter the cause, is typically simple and safe. Bilirubin is reduced by exposing the baby’s skin to light, which is called phototherapy. During the phototherapy, the baby’s eyes are protected from the light with eye patches. Phototherapy speeds the excretion of the bilirubin and aids in its decomposition. Since being exposed to light helps alleviate jaundice, many mothers have heard the saying – “sit with your baby in the sunlight.” However, this advice is ineffective if your baby’s bilirubin level is too high which is why proper testing and treatment is so important. In other cases, where the bilirubin level is too high to treat with phototherapy, a blood transfusion may be necessary to prevent the baby’s tainted blood from reaching the brain.

The consequences of Kernicterus are devastating, and vary depending on the extent to which the brain was injured. Affected infants can suffer from delayed and abnormal motor function, seizures, the inability to coordinate voluntary movements, muscle rigidity and spasms, lack of sensory perception and difficulty speaking from poor or absent muscle control. Infants who suffer from Kernicterus will typically require a lifetime of care and needs like full time attendant care to keep them safe; immense therapy; medical care; surgeries; adaptive equipment; and modalities around the house. Even more, those suffering this type of brain injury will often not be cognitively impaired. Meaning, eventually when old enough, these infants will likely know what happened to them, how it happened and why – most likely as a result of medical negligence. Those inflicted with Kernicterus are stuck in a body that they cannot control, but are smart, brilliant, funny, and have great love and emotion.

In the age of modern medicine, children should never be affected by Kernicterus. Great strides have been made in eliminating Kernicterus, even in third world countries, given the simplicity of the diagnostic testing and the treatment. Nevertheless, Kernicterus does occur. In the United States, Kernicterus is most often caused by medical negligence.

Diagnosing rising bilirubin levels and hyperbilirubinemia is simple; the initial treatment (phototherapy) is also simple and safe; and the cure is forever. A miss, on the other hand, changes the life of an otherwise healthy baby and his or her family forever.

Our law firm, Ratzan Weisman & Boldt, handles cases involving Kernicterus. In fact, our trial and appellate team obtained a $46,500,000 jury verdict after a multi-week trial in El Dorado, Arkansas, where the team represented Kara Smalls, a beautiful baby girl who developed Kernicterus as a result of medical negligence. We were able to help uncover the many patient safety violations in bringing the hospital and doctor to justice resulting in a verdict that will help Kara’s family take care of her for the rest of her life.

If you find yourself facing this or a similar situation, we can help. We can work to provide you with answers and do everything in our power to hold those responsible accountable for their actions or inactions.

In the end, despite how common jaundice is – 60 percent of all babies have some degree of jaundice in the first few days of life – very few new parents know how devastating jaundice can be. Very few parents know the consequences of untreated jaundice and that it can lead to catastrophic brain damage if it becomes severe and is not treated timely and properly. New parents do not need to fear Kernicterus or jaundice if their healthcare providers follow the rules that protect babies from this condition and educate parents who are discharged home while their newborn is still at risk, including those from the AAP Clinical Practice Guideline (some of which was discussed above). To say the least, there is a very significant connection between newborn jaundice and the brain.

Nearly Two Years After Joining RWB, Partner Kimberly Boldt Is Ready to Get Back to Appeals

To consult with our professional team, please fill out the form and submit your request.